Statue of Liberty: A Crowdfunding Queen

We tend to think that crowdfunding is a relatively new invention; something that has come about as a result of the world wide web and the communication and connection possibilities it has offered us. That’s not strictly true; there are some very, very old instances of crowdfunding that many of us don’t associate with the “new” phenomenon. We recently took a look at some of them in this blog post. Here, we take a look at another well-known example.

The Statue of Liberty was a joint project between the United State of America and France. Originally proposed back in 1865 by Frenchman Edouard de Laoulaye, the sculpture was commissioned over 10 years later, in 1876. It was decided that the Americans would be responsible for building the pedestal, and on the other side of the Atlantic, the French people would take care of the Statue and its assembly in the USA. 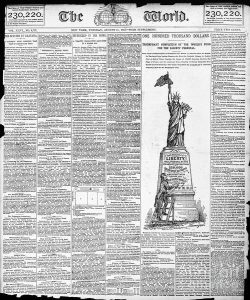 A lack of funds posed a problem for Lady Liberty, and fundraising events were held in both countries. The American Committee of the Statue of Liberty raised some money, but fell short of the necessary target. The New York Governor would not commit city funds to the project, and Congress couldn’t agree on a funding package either. With cities such as San Francisco, Baltimore, Philadelphia and Boston competing for the statue, promising funds in return, publisher Joseph Pulitzer came to New York’s rescue. He launched a fundraising campaign via his newspaper, The New York World.

The very epitome of crowdfunding, the campaign raised $101,091 in just five months. Donations came in from over 160,000 donors; and three quarters of those were less than a dollar. Larger donations came from wealthy New York residents, and the paper kept readers up-to-date with the crowdfunding campaign, listing donors and amounts on a regular basis, and publishing letters from the public on the front page. Those who donated a dollar or more received a mini, 12-inch model of the statue.

Crowdfunding has now become part of our everyday speech; a term we use in reference to Kickstarter projects, lending platforms and non-profit initiatives. It’s interesting to think that one of the truly iconic symbols, not only of New York, but of the United States of America as a whole, may not have existed had it not been for Joseph Pulitzer and his crowdfunding scheme.