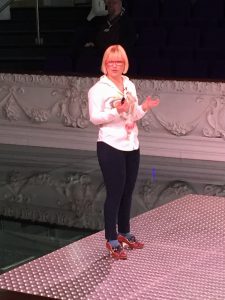 Karoli Hindriks is Founder and CEO of Jobbatical, a global platform that promotes diversity and connects employers with future employees on an international scale.

Karoli gave an inspiring speech at FinTech North that focused on diversity. She commented, among many other things, that often we celebrate success without recognising some of the elements that have contributed to said success – one of which is often diversity.

As Karoli explained, the globalisation of both our personal and professional lives is affecting the choices we make. We are becoming open to more opportunities on an international level, and are prepared to expand our comfort zones, be different and often not only travel but also move and live abroad.

Here, we feature an article written by Karoli. This article originally appeared on the Jobbatical blog. Visit their website to find out how they hire top talent and share opportunities.

When a colleague of mine told a human resources executive that people no longer want to join companies for life, the response was, “But we would like them to stay!” It was reminiscent of a statement made a few years ago by the co-president of HBO, Eric Kessler, who said that the move away from traditional television programming to an internet-based model was just a fad, a “temporary phenomenon” that would eventually pass. Spoiler alert: It didn’t. What was playing in living rooms across the globe had been dictated by programming departments for decades. The future can’t be stopped. TV has been redefined to play on any screen in any location, with content the viewer chooses. Power has switched from the company to the consumer, now more than ever.

A comparable shift is taking place in the way companies operate. Organizations don’t own people’s futures anymore, and employers have to fight harder than ever to hold onto top talent. The era of the corner office is ending. A CEO’s job isn’t to enjoy the best view while sipping whiskey in a comfy leather chair. The CEO has to be the facilitator, the mentor, the enabler of people — not the privileged one with an assistant to do the dirty work while the boss gets to be important for the sake of being important. As an (admittedly overly literal) example of this, I no longer have a desk at the Jobbatical office at all. It was assigned to a new employee the last time I was on a business trip, and all I got by way of explanation was a simple “You never sat there anyway.” Fair enough. Now I alternate between a beanbag chair and a standing desk.

More to the point, twenty-four people from ten different countries have chosen my company as the next step on their career journey. As their CEO I would bend over backwards to make sure that decision is worth their while. Because, you see, while companies no longer own people, the people themselves have taken ownership — ownership of their lives. They choose companies, not the other way around.

It recently hit me, as I was enjoying my moment of zen on a yoga mat, that just like companies, countries don’t own people anymore. Any world leader who believes otherwise and wants to build walls around his country is like a CEO who still wants everyone to join their company for life, no questions asked.

The two phenomena — the changing world of work and the way we consume (yes, consume) countries — are very much connected. Fifteen years ago, people were born, grew up and worked mostly in the same neighbourhood. The extent of your comfort zone was based on accidents of geography: your school, the grocery store, the people you saw around you every day. That also meant you were stuck with the employers in your neighborhood. You took what you could get.

Over the past decade, technology has expanded our comfort zones beyond geographical and political borders. Our friendships are running along the verticals of interest rather than being tied to locations. I may feel closer to friends from Australia or India than I do to most people in my neighborhood in Tallinn, Estonia. Moving around has become more convenient than ever. People are defining themselves through shared values rather than genotypes or the coordinates of their birthplace.

My company works with organizations from Colombia to Malaysia, from Germany to Zambia. We’ve had the pleasure of seeing so much willingness to learn and adjust to the needs of the modern workforce. More importantly, we’ve seen that the winners in the race for talent are the companies whose home countries are backing their needs. No matter how great a company, if it takes four months, ridiculous amounts of paperwork, and endless humiliating interviews to get a visa for the best engineer on the planet, the talent will simply choose to take their skills elsewhere. And they’ll be perfectly justified in doing so. It’s a loss to the company, and a loss to the country.

It’s about time for governments to realize that the race for talent is actually their race. Because an organization can pack up and move just as easily as an individual. Countries that insist on being walled off from the rest of the world will see their talent pools become stagnant, murky ponds overrun by yes-men and stale thinking. Countries that invest in their UX will reap the rewards. Innovation breeds innovation. Initiatives like Estonia’s e-Residency program build bridges, attracting people with bright ideas of their own. And building bridges — not walls — is what will move the world forward.