WLCF to Exhibit at MEFTECH

We are delighted to announce that we will be exhibiting at MEFTECH in Abu Dhabi on the 13-14 March.

The event, which has fast become one of the most renowned and prestigious in the region, brings together members of the financial technology community from across the Middle East and North Africa. Since its beginning, the FinTech event has united over 8,000 financial industry executives and more than 1,000 technology providers, who assemble to discuss developments and exchange ideas.

WLCF’s Business Development Manager, Nick Newton, is excited to have the opportunity to participate in the event. On behalf of the company, he plans to meet with existing contacts in the Middle East, and also look to develop new partnerships and business relationships that will lead to inter-continental collaboration.

According to a recent paper published by the Cambridge Centre for Alternative Finance (CCAF) and Energy 4 Impact, levels of P2P consumer or business lending activity in the Middle East and Africa are still quite low; something that events such as MEFTECH are working hard to change.

In 2015, $158.8 million was raised in online alternative finance funds in the Middle East and $83.2 million in Africa; $164.2 million of this combined amount constituted funding for start-ups and SMEs. In the Middle East, over 90% of this funding originated from home-grown platforms headquartered there; while the opposite is true in Africa, with 90% of the funding coming from elsewhere.

“The Middle East crowdfunding market represents tremendous opportunity, since the P2P lending industry is still in its infancy. We are keen to find a local partner that needs a world-class crowdfunding technology solution to achieve their business vision.”
Daniel Rajkumar, Founder and Managing Director

Israel stands out as the region’s dominant leader within the alternative finance field.  Israel and the UAE have the most progressive regulatory conditions, and the former leads the way in equity-based crowdfunding in the Middle East. The country also boasts numerous entrepreneurs dedicated to the world of technology. Between 2013-2015, an impressive 75-80% of total market activity in the Middle East was attributed to Israel.

Excluding Israel for a moment, the report explains that in 2015, the Middle East market activity reached almost $40 million. 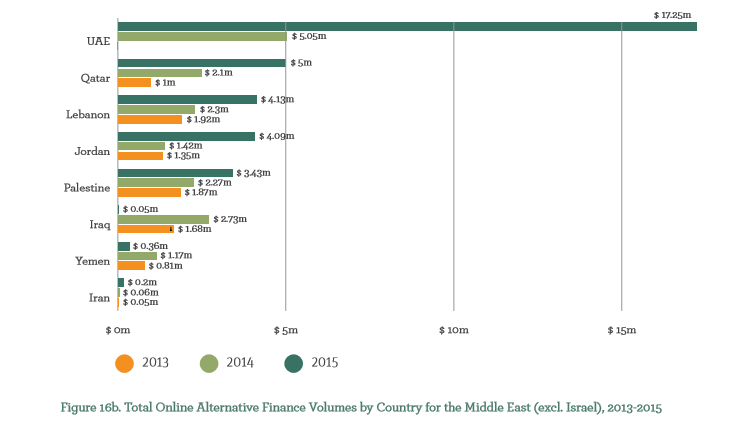 There is clearly a great deal of potential within the region: potential that the organisers, exhibitors and participants of MEFTECH hope to realise over the coming years.

We would like to give special thanks to our hosts, Matchi, who extended the event invitation to us.

If you will be at the MEFTECH event, we would love to hear from you. Please get in touch with Nick at nick@whitelabelcrowd.fund.