FinTech in the north of England is a particularly hot topic of late. In the last three weeks, there have been at least four FinTech events in the region, including the FinTech North Seminar on Friday 8th November. The sector is gaining the attention and support of big supporters and companies. The latest event, the NorthInvest Summit, held on the 14thNovember, was hosted and sponsored by KPMG at their new Leeds offices, in collaboration with NorthInvest.

The breakfast event kicked off with three short presentations from Daniel Rajkumar of White Label Crowdfunding and rebuildingsociety.com, Alex Letts, Founder of U and Henri Murison, CEO of the Northern Powerhouse Partnership.

Daniel set out his views on the future growth and direction of the FinTech sector, highlighting that the north and the UK as a whole need to do more to keep up with FinTech developments happening further afield, in China and the USA for example. He went on to emphasise how organisations such as FinTech North and NorthInvest would be key in bridging that gap, not only within the UK, but also on the international scene.

Alex Letts followed Daniel, and addressed the question: “Can the traditional banking sector keep up with the pace of change and development of the challenger banks?”

Following Alex, Henri Murison took to the floor.  He stressed the opportunities that the north has, particularly within the FinTech space. He stated that for the region to benefit from these opportunities, there must be better collaboration between all the organisations pushing for the growth. He cited greater rail and transport connectivity between the region’s cities as a key factor in building greater collaboration within the region.

Following this, Mark Casci, Business Editor for The Yorkshire Post and panel chair, opened the floor to questions. The question that saw the most discussion between panel and audience was whether there are short-term wins and actions that can drive the growth of business, particularly FinTech business, in the north. This question arose from the observation that much of the stated NPP and government policy is long-term, focusing on discussions of significant improvements by 2030 and 2050. Participants asked:

“What can be done within the next five years?” 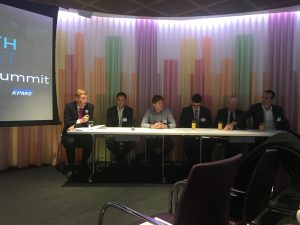 Henri said that the more short-term goals and ambitions of cities in the region include improving the infrastructure crucial to attracting good business, the prime example being 5G internet connectivity and the connection of fibre to premises.

Alex believes that money is the key driver for quick change, believing that a proper investment fund led by the government would be key to growing the industry in the north. He emphasised this point by stating that if it were not for the funding provided by the Yorkshire Enterprise Fund, he would likely not have set up in Sheffield. Chris Sier, FinTech Envoy for the North, agreed with Alex, saying that Leeds, and the north in general, needs to receive the same treatment as London, where the tech scene was supported and bolstered by funding from the City of London and Innovate Finance.

Graham Pearce, of KPMG and NorthInvest, followed the discussion by offering a recap of the main sentiments and action points discussed in the course of the morning; aspects that need more attention in order for Leeds to become a key international FinTech hub. These include the need for greater and closer collaboration between various stakeholders, for more investment in the sector in the north and for more gravitas. Chris Sier closed the morning’s event by citing a need for “less serendipity and more collaboration.”

The FinTech gatherings in the north continue with a FinTech North event on 8th December. Sign up today to avoid missing out.